Today was the first day of performances here at Encuentro 2016 in Santiago, Chile.  The following is a summary of my notes from my surveillance.  At the end of the festival I will scan in some of my drawings and maps, and add them to the existing evidence.  I’ll also add some video as the week goes on.

The conference handily provides the names of all the artists and their performances, making it easy for me to keep tabs on them!  You, faithful citizen, can even follow up online to see what other incriminating evidence may be found on these artists. The performances were: Felipe Cunha’s Flower Pot, Chun Hua Catherine Dong’s The Yellow Umbrella: An Unfinished Conversation, Eli Neira’s If you look at me I exist, and soJin Chun’s Aturquesada.

soJin Chun was dressed in tealquoise clothes, and had a basket of items of the same color, which she seemed to be selling or trading.  Does she have a license? I am not sure if this is a good or bad practice.  On the one hand, capitalism like this leads to freedom and even anarchy, which are values I cannot share.  On the other hand, she seems to be serving the citizens with her goods, so that the State can attend to other things, which I support.  She is said to be promoting tealquiose—half teal, half turquoise.  And yet why do so—if God and the State created them as two colors, why unnaturally merge them into one ersatz pigment?  This seems like a sin against nature itself!

Chun kept a low profile.  She wandered around the floor, spreading her presumably pernicious ethos one-by-one.  However, she stayed long after the other artists left.  Her endurance—and her dogged resistance against the State’s wisdom regarding the separation of hues—knows no boundaries.  At first she seemed the least worrisome, but now I am not sure. 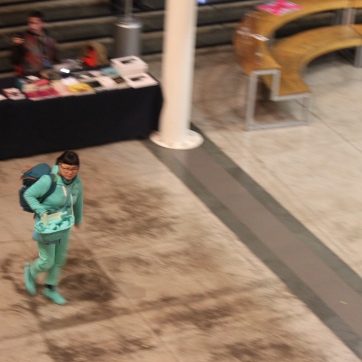 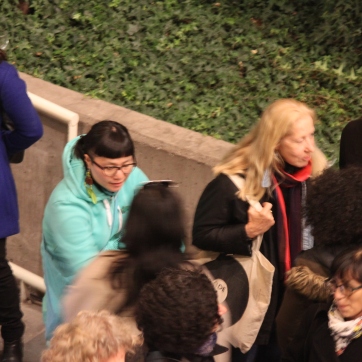 Here she seems to have caught on to my presence.  I must not have been camouflaging my presence enough during my reconnaissance.  Tomorrow I must do better.

The twelve Umbrella Ladies from Chun Hua Catherine Dong’s troop were at the center of attention for most of the night.  They were all dressed the same, and had identical yellow umbrellas.  They stood in various poses with the umbrellas through the night.  Like soJin Chun, there were good and bad aspects to this performance.  On the one hand, I support their initiative to all wear the same uniform, assembly-line style, just as my fellow troopers and I do.  This shows that they have surrendered their egos and erased the dangerous virus of individuality that too many artists embrace. They have the look of an army on parade, which is always good for the people’s morale. However, there was entirely too much stamping and hammering of umbrellas on the ground—it had the sound of a protest, which is unacceptable.  I am also concerned about a section near the end where they all embraced—compassion signals an emphasis on the individual, as opposed to embracing unanimity.  Plus, were the umbrellas a reference to Christo, whose golden umbrellas were known for their lethality?  Perhaps—just perhaps!—these women are implying that they are also unexpectedly dangerous.  But dangerous to whom? The individual, or the State? 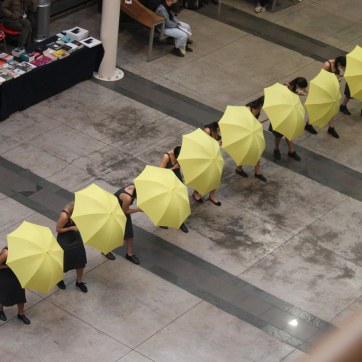 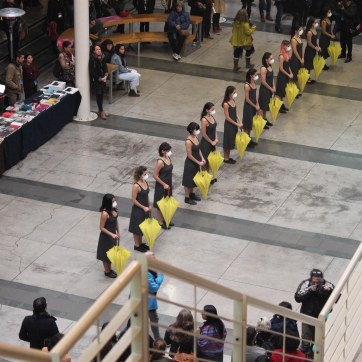 Eli Neira, who dressed like a maid, seemed to be the most dangerous element there tonight.  To her credit, a maid is a servant of order, which is all to the good.  However, by wearing a stocking on her head she allied herself with criminals, or even worse—rebellion.  Also, she wrote something on a tray.  I only speak Galactic Basic, so I don’t know what it said, but even the sound of the words felt unnecessarily defiant.  Hopefully an expert will translate it and get to the bottom of this. 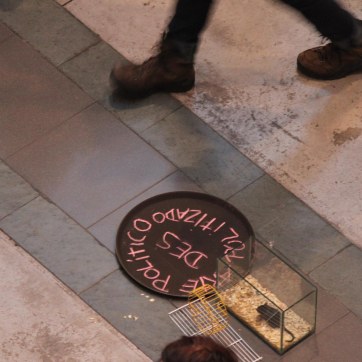 It is good to see that the State has already assigned someone to surveil her from close-up!  The more of us at work, the better.

However, the lone male artist may have been just as dangerous.  At first I was not so worried—he was all dressed in white, which of course I support full-heartedly.  But then he stripped naked.  By taking off his clothes, he took away society’s greatest gift—the possibility to conform and thus to relax in anonymity.  He should learn from the Umbrella Ladies, who understand that we are better when we all look alike and uniform.  After stripping, he dressed up in a suit covered in flowers—surely an attempt to camouflage himself into the background and escape my steely gaze, showing his guilt.  Worse, nature is the enemy of culture.  There is no excuse for embracing nature over the artificiality that we have all put so much work into creating.

He did eventually put his all-white clothes back on, so perhaps he learned his lesson after all, and chose to symbolically return to the color he shared with me, the tool of order and the State. 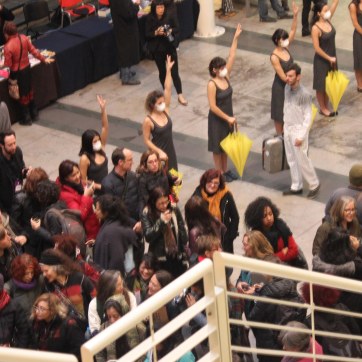 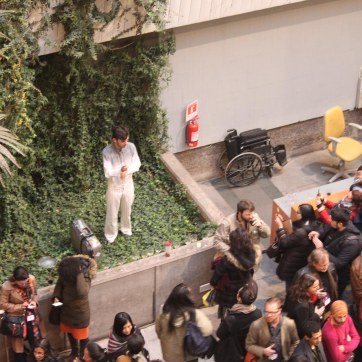 Many people were handing out pamphlets to the crowd.  It was presumably propaganda, but what kind?  Is it friendly to the State’s values, or seditious?  I must check on this later.  Also, on a related note, according to news passed on to me by a friendly communicant who was present last night, the four artists I have mentioned were not alone—the crowd was full of artists as well!  Given this fact, in combination with artists’ proven predilection for perilous pamphlets, we can only assume the worst of the pamphlets’ content. 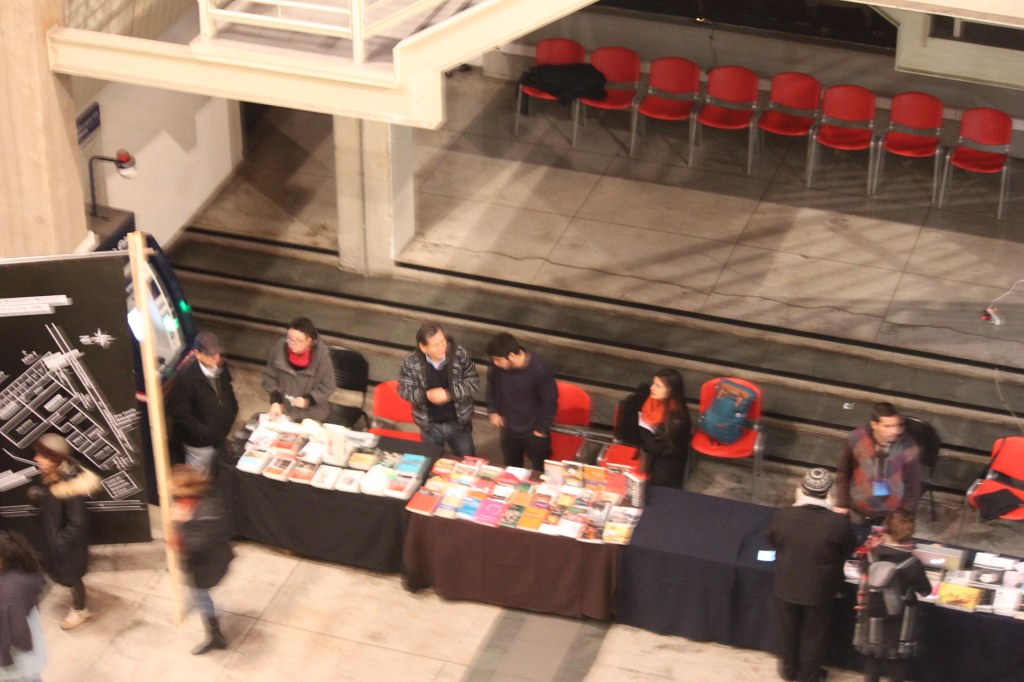 There was a large mob there there all night long, most of them basking in the distasteful anarchy of the show,  magnetized by the different subversive acts.

However, many of the people in the crowd had cameras, and happily joined in with me in surveilling the artists’ every move.  With that much evidence, no one can pretend that tonight’s subversive actions did not happen.

This one picture in particular brings me near to tears of satisfaction: this girl is bravely standing up to the Umbrella Ladies, just as the boy stood up to a tank in China years ago.  Speak truth to power, young lady! 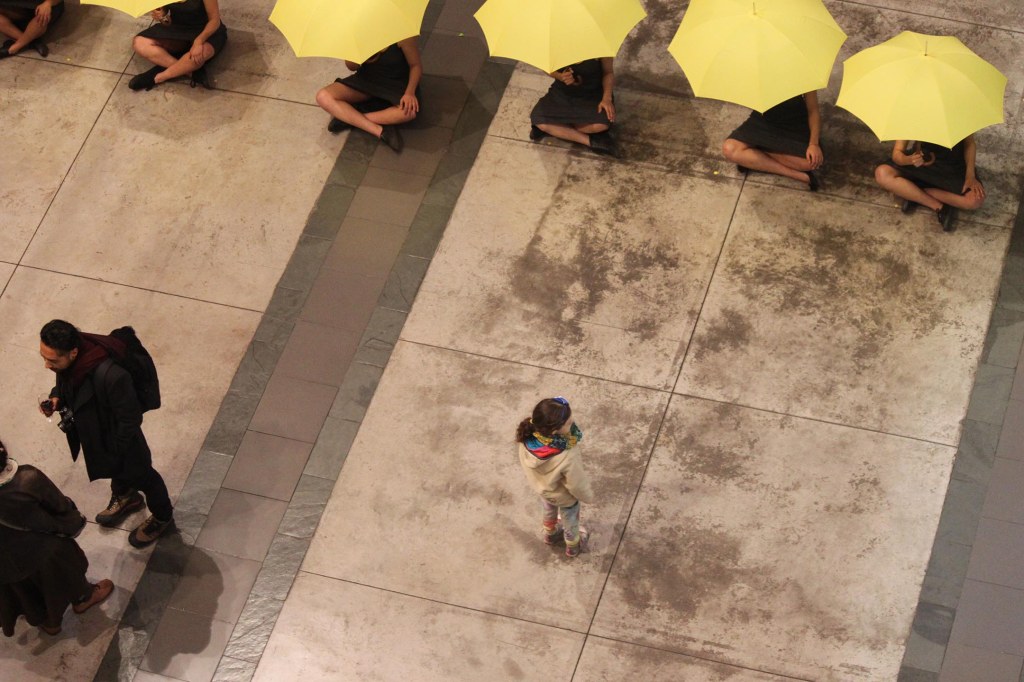 I am also happy to see these two, who clearly saw the dangerous leanings of the crowd, and elected to free themselves from its temptations. 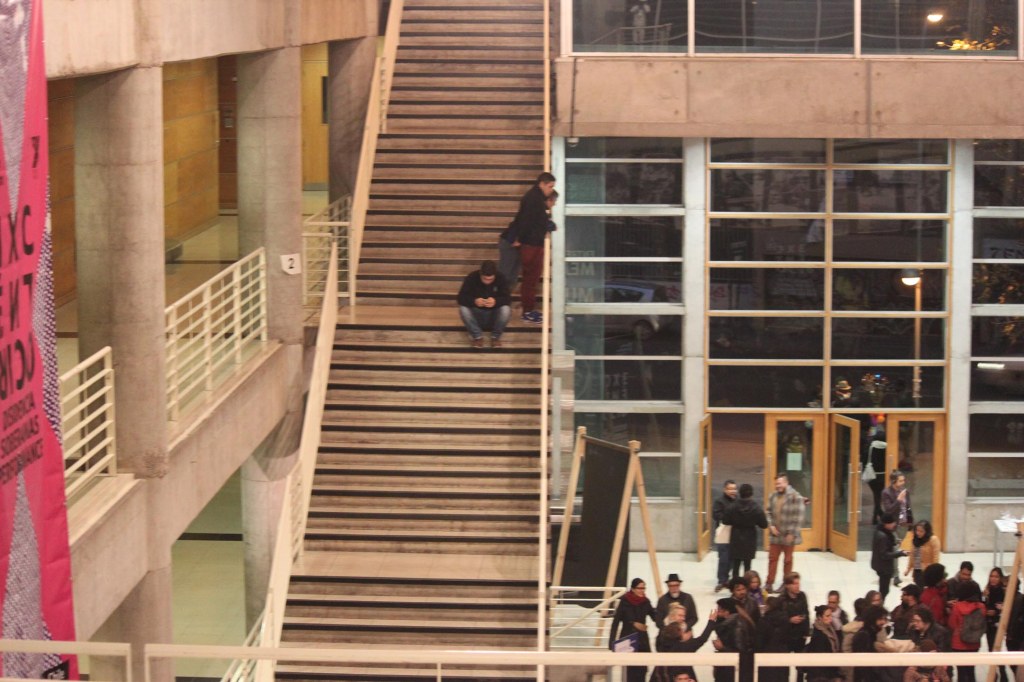 Some of the crowd showed their loyalty to the State by saluting or photographing me, its agent, just as I photographed them.  I honor them, and their presumed allegiance to our shared value of peace through order, in return. 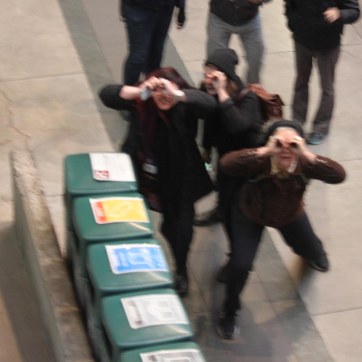 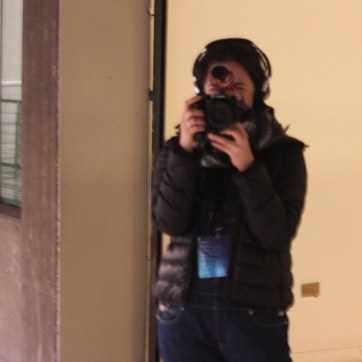 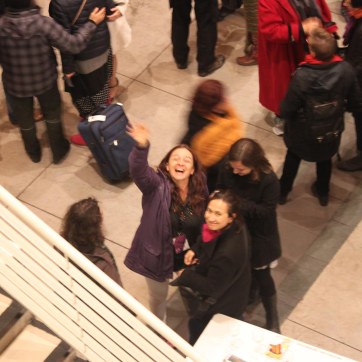 This one individual, at least, seems to have been scared straight.  I think we need worry no more about her being seduced by the dangers of art. 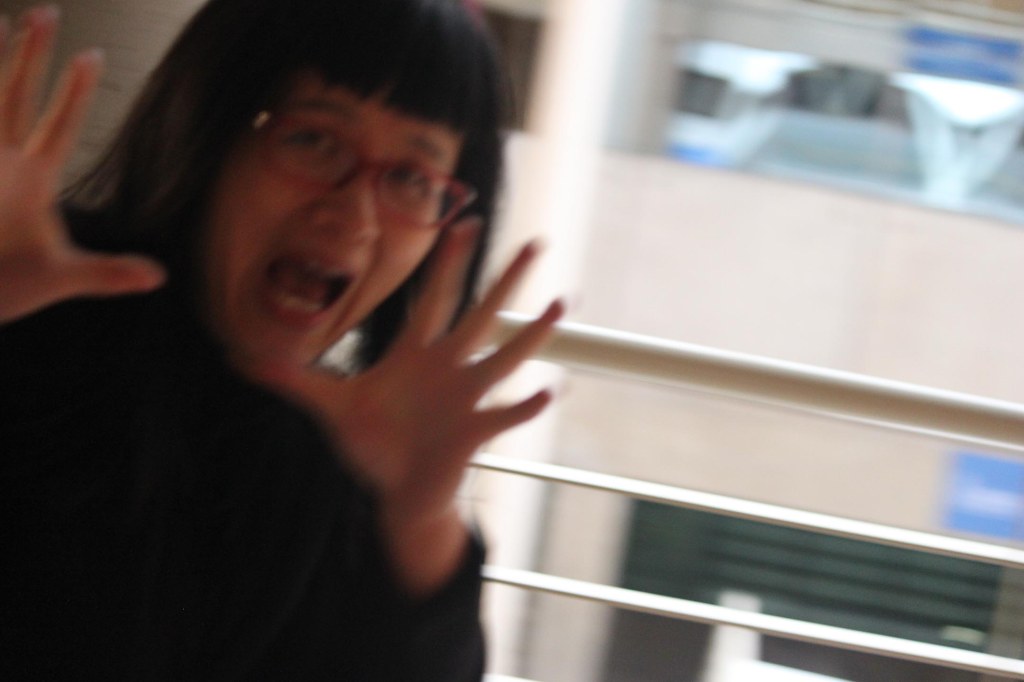 Finally, I noticed that there was an authority figure on the floor, standing behind a desk.  And yet he did nothing about any of this chaos!  Could it be that he sees, but does not see?!  However, as a fellow authority figure, I will give him the benefit of the doubt (a boon I do not extend to the artists)—perhaps it was his orders to do nothing.  Perhaps he was just supposed to watch and surveil, like me, gathering enough evidence to convince the world of art’s danger once and for all.  I must believe this is true, and in that spirit will continue on with my work tomorrow!